Challenge players worldwide to match-3 battles. In this epic puzzle RPG, lead your squad of heroes in your quest to be the Brawl Master. Join the fight now!
4.5/5 Votes: 5,289
Report
Developer
Skyborne Games IncUpdated
May 14, 2022Version
1.3.17Requirements
4.4Downloads
50,000+Get it on 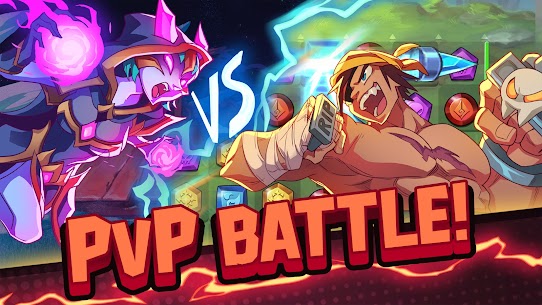 Challenge players worldwide to match-3 battles. In this epic puzzle RPG, lead your squad of heroes in your quest to be the Brawl Master. Join the fight now!

MATCH 3 PUZZLE BATTLES
You and the enemy take turns solving match 3 puzzles on the same board. Form powerful match 3 combos to smite the enemy heroes or play defensively to deny their most powerful attacks. Make fun tactical tile matches to defeat the enemy in PvP combat.

PvP FIGHTS
Set up the ultimate defense team. Raid other players in versus battles around the world. Steal their trophies by defeating their defending heroes in turn based puzzle battles! Climb to the top of the arena and collect legendary heroes.

EPIC HEROES & SPELLS
Summon over 30+ heroes each with game changing ultimate skills. Disrupt the enemy formation by knocking back enemy tanks. Backstab an enemy hero! Control the tide of battle with fun hero skills! This is a game of strategy and tactics, the best team will emerge victorious!

MODERN PvP REWARD SYSTEM
Collect chests as you win battles, open them while you are idle. Puzzle Brawl is a mashup of traditional match 3 RPG with generous modern PvP games’ reward systems.

TACTICAL FORMATION
Discover unique team ups by placing your heroes in different positions. Form the best attack and defense squads to earn the most trophies! It is an easy to play fun to master game!

PLAY WITH FRIENDS
Form a guild with friends for even more Puzzle Brawling fun! Share strategies, donate cards to help your guildmates, build your own community! Compete with each other to see who is the best Brawl Master!